skip to main | skip to sidebar

OK. I actually really wanted to document this lab for a couple reasons.

1. It was terribly frustrating and documenting its success feels nice.
2. I thought recording some of what I went through would serve as a nice reference in the future when I attempt this again.

1st: Installing the firmware.
PCs have great difficulty reading the maxstream usb hardware. I have since ordered a usb/serial xbee piece. Not here yet. But I think with these radios it so worth the investment.

I tried:
1. The maxstream board with X-CTU
--it would not recognize that the usb port was there
2. The radio on an arduino
This didn't work. The pc was able to recognize the port at least, but it could read or write. I have since learned you also have to connect DTR and RTS pins between the arduino and the xbee, not just the RX and TX. I haven't tried installing the firmware since I learned about this, but good to know for the future.

2. Getting the radios talking
After I set my boards up as I thought was good and installed my appropriate Romancing code; I wasn't getting any flashing lights (as it was supposed to do). So, I tried many a thing. First I wanted to use LEDs on the radio pins to understand what was going on. Well, I didn't get this right. I counted 1-10 top>down on the left side and then again 11-20 top>down on the right side. This was incorrect. The pins read 11-20 down > top (not top>down). Rob Faludi pointed out my mistake and once we had the LEDs in, it was clear that the radio were talking to each other. Yay! Such a small post. But they worked. 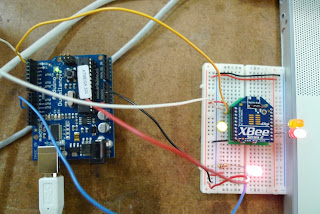 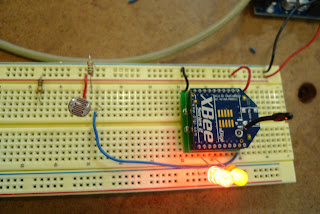